“Whoever wants to follow me, let him deny himself and pull up his stakes and follow me. (Mark 8:34)

Is this what the other versions say?

This translation of Jesus' statement is significantly different from some other translations. For example, here is the New King James translation:


“Whoever desires to come after me, let him deny himself, and take up his cross, and follow me."

First, Jesus is speaking to a large crowd, after he had a direct discussion with his disciples:


After he called the people over to him with his disciples, he said to them, (Mark 8:34)

A translation of the Greek word σταυρός (stauros) to "cross" is dubious and unwarranted. Jesus had not been crucified at this point, and no one knew he would be crucified. How could this large crowd of interested people understand what Jesus was speaking of?

Furthermore, if Jesus was speaking of a cross used to persecute people, was Jesus suggesting that in order for people to become his follower they carry a cross and then be hung on that cross? Such a notion would be equivalent to asking anyone who wanted to follow him to prepare for their own crucifixion. Such a teaching would certainly be scary for anyone.

Would Jesus really be insinuating that in order to be a disciple they had to be prepared to be crucified?

Plus, Jesus didn't carry his own cross - if that's what it even was. It was carried by Simon of Cyrene. Other references, in fact, indicate that Jesus' body was nailed to a tree, possibly with a cross beam, to make what has been referred to as a classic Roman crucifixion stake.

Other texts indicate that the Romans would use different objects to form their stakes when it came to crucifying people. They might use a tree or a wall or a gate or a beam from a roof. The historian Josephus wrote that the Romans nailed the victims to stakes of various kinds.

The Gospel of Truth - an ancient Scripture and part of the Nag Hammadi library said to be written in the first or second Century - says this twice about Jesus:

The Letter from Peter to Philip says:

The Revelation of Peter also gives several indications that Jesus was crucified on a tree, including verse 53, 54 and 57.

So what is Jesus referring to?

The reality is that Jesus is speaking of something entirely different.

The Greek word, σταυρός (stauros) refers to a "stake" - a pole or stick that is usually assembled into a cross - used to prop up plants, especially vines. Have you ever seen a vineyard? Every grapevine is "staked" so the vine can crawl over the stake limbs and branch out. These stakes were - and still are - tied with another stick to form a cross. This also allows the farmer to easily harvest the grapes that will hang off of the stake.

Anyone who has tended a garden will know that stakes are used not only in vineyards. Stakes are used to prop up practically any young plant, but especially used for tomatoes, cucumbers, squash, beans and many other plants that grow as vines. The stakes are needed to keep the plant propped up.

This is confirmed by the lexicon defining σταυρός (stauros), which states:

"an upright "stake", esp. a pointed one, used as such in fences or palisades" 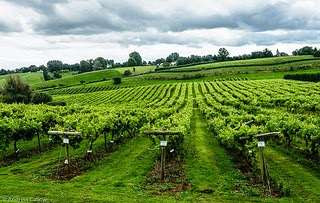 Vineyard Stakes: Photo By Andrew Callow
We must remember the context of the situation. Jesus is speaking in front of a large crowd as he was teaching in the 'villages around Caesarea Philippi' (Mark 8:27). These were rural communities where farming was a primary occupation.

This term "stake" was used popularly in farming communities - especially those that grew grapes and other vines and trees that needed propping up.

What does Jesus mean as he uses this term?

We must consider the full statement. First Jesus says, “Whoever wants to follow me, let him deny himself." The word "deny" is translated from the Greek word ἀπαρνέομαι (aparneomai). According to the lexicon, the word means, "deny - to affirm that one has no acquaintance or connection with someone."

Jesus is speaking of a person denying something. What is it? "Themselves." Jesus wants his followers to deny themselves. This means denying a life of self-centeredness.

Now in the next phrase, the word "pull up" (often translated to "take up") is being translated from the Greek word αἴρω (airō), which means, according to the lexicon, "to raise up, elevate, lift up" and also, "to move from its place."

This metaphorical phrase - used by Jesus two thousand years ago, is still used in modern English. The phrase is:


Why does pulling up stakes relate to following Jesus?


Jesus is speaking metaphorically about commitment. If someone wanted to follow him they must be prepared to leave behind all of their materialistic goals and notions for happiness. They must commit themselves to follow Jesus, and leave behind their worldly life. They must 'pull up stakes' on their previous life of self-centeredness.

Jesus said a similar thing to a student who Jesus instructed to follow him, and the student said he needed to go back and bury his father:

The concept is metaphoric but also practical. We might think that if we physically left our house or our family and became a monk in a monastery then we would be following Jesus in the sense he is instructing here. But that is not the case.

But we may be able to physically remain in the same place, yet still "pull up stakes" on our self-centered consciousness by putting our love, devotion and focus onto the Supreme Being.

This is confirmed by Jesus' most important instruction:

Translate to your language

Psalm 63 - Your Love is Better than Life

Anonymous
Thank you for reading this humble attempt to present some of the non-sectarian wisdom that has been taught since ancient times by wise teachers for thousands of years.